We are happy to announce a screening celebrating the work of Haneda Sumiko at Open City Documentary Festival. “Tribute to Haneda Sumiko” is part of the symposium “Japanese Documentary Filmmaker Haneda Sumiko. Authorship and Gender Discourses”, taking place online on the 22nd of July and in September. The symposium brings together scholars discussing the work of Haneda, and it includes the online screening of two of the filmmaker’s greatest films, Ode to Mount Hayachine (1982) and Into the Picture Scroll-The Tale of Yamanaka Tokiwa (2004).

This screening celebrates the work of Haneda Sumiko, one of the most prominent documentary filmmakers from Japan and one of the few women working in non-fiction cinema in the postwar period. Born in 1926, in Dalian, China (then Manchuria, under Japanese occupation), in 1949 Haneda entered Iwanami Productions, a company producing educational and promotional films, where she would make films about the arts, education, and nature, including A Women’s College in the Village (1958), Ancient Beauty (1958), or The Cabbage Butterflies (1968). In 1976 she directed her first independent film, The Cherry Tree with Grey Blossoms, a personal project she had worked on for many years. Haneda led a prolific career and directed over 80 short and long films. In addition, she founded her own production company with her husband and published books about her filmmaking. She made films about folkloric dances and changing rural traditions (Ode to Mt. Hayachine, 1982), portraits of aging artists such as Akiko-Portrait of a Dancer (1985) or the monumental Kabuki Actor Kataoke Nizaimon (1992-1996). Haneda got widespread recognition with her films about welfare politics and caring for the elderly. Other work she did deals with legacies and histories of feminism in Japan, with films about pioneer women in labour unions or about the life of writer and peace activist Hiratsuka Raicho. Later in her career, Haneda reflected upon her early life in China, with films about the Japanese settlers in Manchuria such as Faraway Home – Lushun and Dalian (2011). She also participated in the creation of the Tokyo International Women’s Film Festival (1985-2012), the first of its kind in Japan.

Still from A Women’s College in the Village, 1957. Image courtesy of Haneda Sumiko and Kanatasha.

The first film directed by Haneda Sumiko for Iwanami Productions depicts the efforts of women in a small village to overcome their conventional lives, while struggling with their daily toil, worrying about how to care for their households. 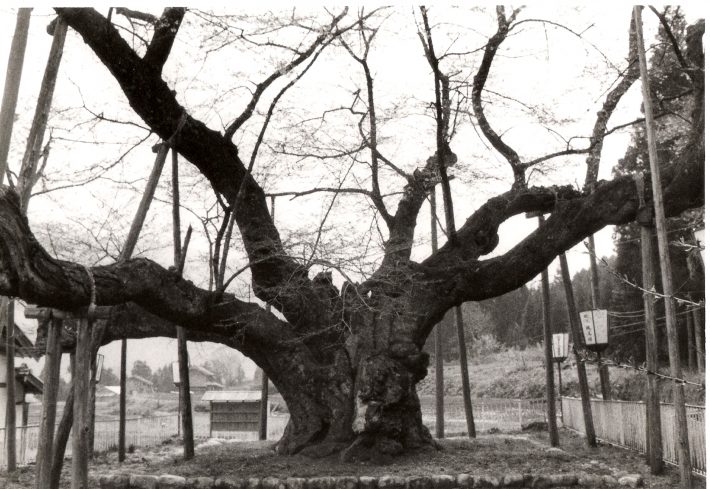 Still from The Cherry Tree with Gray Blossoms, 1977. Image courtesy of Haneda Sumiko and Kanatasha.

Haneda’s first independent film, a project she honed over several years, is a paean to a millenary cherry tree that can be found in the Neo village in the Gifu prefecture. The film deals with the history of this magnificent tree, the changing social life of the community living around it and the filmmaker’s memories. As Haneda wrote, this personal film became an act of self-discovery, both a gesture of celebration and mourning, which allowed her to find a new path in filmmaking.
“Trees are animate in Japanese culture, and Haneda treats the object of her research as the main hero and an independent creature, while social life, natural landscape, poetry, and intimate impressions are built around it. Everything is interconnected in this film—the voice over with the discourse on imminent changes, the languid pace of landscapes changing in different seasons, people caught by camera, thoughts on sorrowful loss and memories. It provides an authentic view of the lost traditional and leisurely Japan before the technological and consumer boom. People in this country truly feel their connection to the earth they live in and poetry they have composed about their motherland for many centuries.” (Unattributed, adapted from https://garagemca.org/)

This screening is held in partnership with the Japan Foundation and will take place at the ICA on Saturday 11th September.

The symposium is held in partnership with the Japan Research Centre (SOAS), Birkbeck School of the Arts, BIMI (Birkbeck Institute for Moving Image), the Japan Foundation, Meiji Gakuin University and supported by the Great Britain SASAKAWA Foundation.